The war in Ukraine isn’t just a catastrophe for humans – it’s one for dogs, cats, and other animals as well. With support from donors to PETA’s Global Compassion Fund, PETA Germany is working hard to ensure that every animal at the border or in Ukraine gets the care they desperately need.

The team has fed more than 84,000 dogs and cats and has transferred nearly 1,000 of them from overburdened shelters! Check out PETA’s blog for the latest on the work that’s being done, thanks, in part, to the Global Compassion Fund.

With resources provided by the Global Compassion Fund, PETA Asia was the first group to reach the Philippines’ remote Taal volcano after its devastating eruption in early 2020, and during much of that relief work, its team members were the only ones there.

They put their lives at risk for weeks to reach animal victims of the disaster, gently coaxing them from ruined buildings and piles of ash and debris. Rescuers docked at the ash-choked volcanic island each morning on boats packed with food and veterinary supplies and left each evening with a boatful of animal passengers awaiting veterinary treatment – and, later, adoption into loving homes.

Donors to PETA’s Global Compassion Fund help animals like Arrow – a long-neglected dog found by a PETA UK rescuer in the wake of a massive explosion in Beirut that left hundreds dead. Today, he shares his life with three other beloved dogs in a home in the city’s hills. 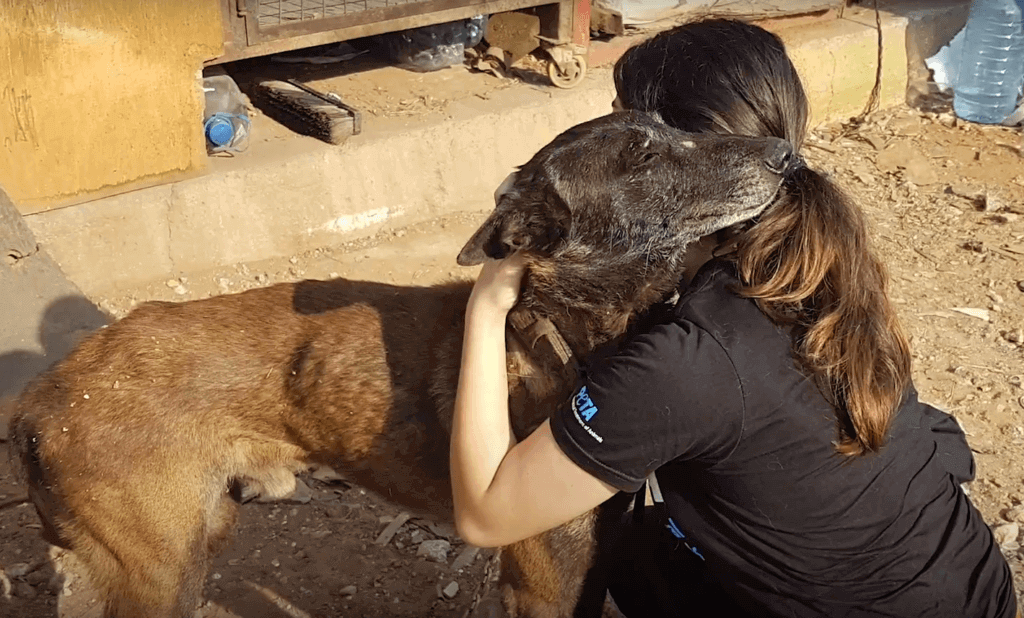 The Global Compassion Fund helps PETA India’s Emergency Response Team respond to urgent cases of abuse and neglect at all hours of the day and night – often when no one else is willing or able to take action. Kind people from across India contact the team for help when they learn that an animal has been beaten or struck by a car, when horses are being illegally raced, when wild animals are illegally held in captivity, and in many other emergencies. PETA India’s trained staff responds to almost 1,000 such calls every week!

PETA’s Global Compassion Fund also supports rapid-response and relief programmes in other regions – from providing a neglected dog in Petra, Jordan, with urgent veterinary care to delivering supplies and aid to animal victims of hurricanes and other disasters.

Your support of PETA’s Global Compassion Fund powers sterilisation campaigns that are preventing thousands of dogs and cats from contributing to the homeless-animal crisis.

In Romania, hundreds of thousands of dogs and cats live on the streets or in the woods, struggling to find scraps of food to eat and clean water to drink. Very few have anyone at all to look out for them.

Backed by the Global Compassion Fund, PETA Germany and Romanian group Eduxanima are implementing a massive, multipronged initiative to reduce suffering and animal homelessness – sterilising and treating thousands of animals each year.

In the Philippines, the Global Compassion Fund is supporting the organisation behind landmark sterilisation drives in desperately poor areas near Manila. In Mexico, it helped launch an epic spay-a-thon that will prevent thousands of dogs and cats from being abandoned on the streets of Cancún.

The generosity of Global Compassion Fund donors is also helping Animal Rahat – a wonderful group supported by PETA. It has successfully sterilised 100% of the animals in more than 20 villages around the Indian state of Maharashtra and is working towards the same success in many more.

When we work together to improve animals’ lives, we can inspire kindness in everyone.

In India, Animal Rahat’s community initiatives are giving long-suffering working animals a peaceful retirement by encouraging owners to replace them with environmentally friendly vehicles – something that betters life for both the animals and their owners. Animal Rahat’s humane education programmes even include field trips – when teachers and students visit the group’s sanctuary in Sangli (and sometimes groom the four-legged residents), they experience first-hand the importance of being kind and gentle towards animals.

Outreach work supported by Global Compassion Fund donors is improving the lives of companion animals in Peru and South Africa; giving a boost to the work of animal activists in Serbia, Ukraine, and other countries; and spreading the vital message of having respect for all beings.

In Romania, PETA Germany and Eduxanima are using the wonderful Compassionate Citizen humane education programme to help young people learn lessons of kindness towards animals that will stay with them for their entire lives. The programme is such a hit that it’s become mandatory in some of the regions that the groups work in.

PETA’s Global Compassion Fund is funded almost exclusively by the contributions of kind individuals like you. Your gift is helping our affiliates and partners create positive, sustainable change in corners of the Earth where animals desperately need us – and may have no other hope.

Your generous support helps make the world a better place for all beings. Please, give what you can today.