Ahead of the 2021 Australian Open final, we’ve crowned our own tennis champions – and it has nothing to do with how they hit a ball with a racket!

Framed awards are on their way to teenage prodigy Jannik Sinner and Grand Slam finalist Naomi Osaka who we think are just ace for their acts of kindness and respect to animals on the courts.

During his match against Denis Shapovalov, Sinner stopped play in the third set to tend to a moth who landed on the court, carefully manoeuvring the insect onto his racket and dropping them off by the chair umpire.

In a similar act of compassion, Naomi Osaka was mid-match against Ons Jabeur when a fan yelled, “There’s a butterfly on your legs”. Before serving, Osaka took time to not only acknowledge the butterfly, but to gently escort the insect off the court.

We take our visors off to these compassionate athletes for displaying respect for the insects who made their way onto the courts and making sure the animals weren’t injured during the match.

Moth and butterflies are sentient beings, and as these lovely tennis champs demonstrated, deserve our kindness and compassion – as all animals do.

No matter who wins the tennis on Saturday, as far as we’re concerned Shapovalov and Osaka’s on the ball actions to help animals make them the real winners at this year’s Open.

Feel inspired by these acts of kindness towards animals? Join PETA’s activist network to learn how you can help animals too! 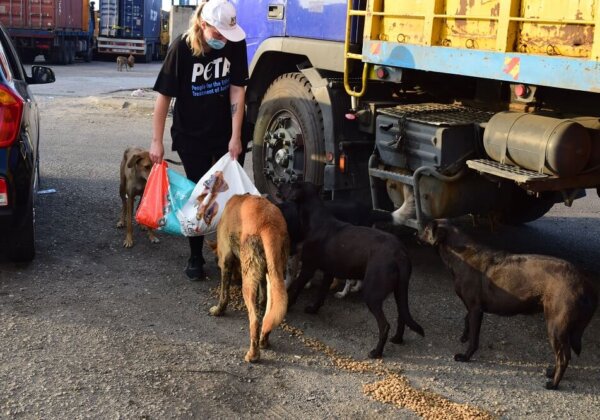