A man has been charged after footage surfaced of a sheep being sheared with a chainsaw in Tasmania.

Police and RSPCA Tasmania investigated the matter after a video went viral on social media in April.

Violence in the shearing industry is nothing new.

While using a chainsaw as a shearing tool is obviously animal abuse, multiple PETA entity investigations have shown that violence is par for the course in this industry.

In 2014, PETA US released a video investigation revealing extreme cruelty to sheep in Australian shearing sheds. Workers punched sheep with closed fists and electric clippers, knelt on their necks with their full bodyweight, and slammed them onto the floor. After shearing, sheep were left with bloody, gaping wounds, which were crudely sewn up without any pain relief.

Six shearers pleaded guilty to cruelty to animals, and the industry called the investigation a “wake-up call” that had forever changed it.

Since then, international PETA entities have exposed cruelty on 116 farms in six countries: Argentina, Chile, England, Scotland, the US, and, of course, Australia. But nothing has changed.

A 2020 investigation – once again in Australia – showed that shearers kicked sheep in the abdomen and back, punched them in the face, and stood on the neck of a sheep as she flailed in fear. Workers talked about other shearers who had broken a lamb’s leg, cut up sheep, and gouged them in the eyes. A shearer still employed by the crew allegedly bit a sheep’s ear off in anger.

No animal naturally evolved to need human interference to survive. The only reason some sheep, like Merinos, need to be sheared today is because humans have bred them to be that way. In fact, the industry has bred them to have such wrinkly skin and such an overabundance of wool that in Australia, it’s normal to cut off the skin and flesh around their backsides to create a smooth scar that doesn’t trap urine or feces. Let that sink in!

The wool industry is also inseparable from the cruel lamb-meat and live-export industries.

So why support an industry that breeds animals to suffer from problematic physical traits, mutilates them, and either slits their throats or puts them onto floating ovens bound for the Middle East?

There are so many animal-free fabrics, including organic cotton, hemp, bamboo, and lyocell, that are kind to animals and the environment. Click the button below to find out more about shopping to help sheep! 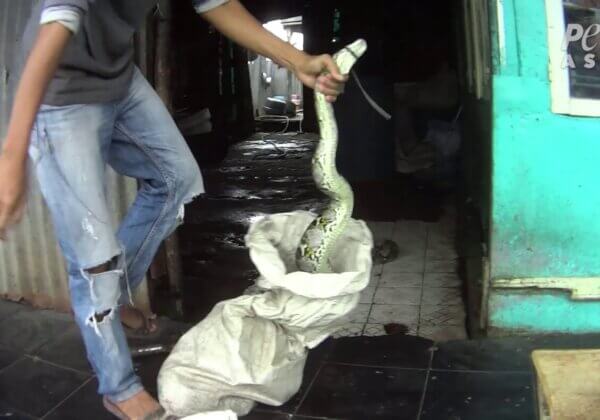