On the eve of the Melbourne Cup, PETA and the Coalition for the Protection of Racehorses have descended on Flemington wearing geometric horse masks and cracking “whips” shooting blood-red smoke into the sky.

The protesters carried signs reading, “Nup to the Cup” and “You Bet, They Die.”

You Bet, They Die

Anyone with an ounce of humanity can see that whipping sensitive animals so that some folks can win some money is wrong. And the horses often die while trying to run faster.

During the 2018 Melbourne Cup, 5-year-old Irish Thoroughbred The Cliffsofmoher fell badly, breaking his shoulder. He was killed shortly thereafter. Other casualties include Verema in 2013, Admire Rakti and Araldo in 2014, Red Cadeaux in 2015, and Regal Monarch in 2017.

Between August 2019 and July 2020, 116 horses died on Australian racetracks. Their deaths were traumatic and frightening, a stomach-churning mess of tangled legs, fractured bones, and broken spines.

These recorded track deaths are only the tip of the iceberg. Most states don’t even report deaths that occur during training or in trials, and stewards aren’t required to list the deaths of horses caused by on-track injuries if the animal is removed from the track on race day and killed later.

Horses used for racing have been specifically bred for speed at the expense of their health. They weigh more than 500 kilograms, are supported by ankles only the size of a human’s, and are whipped and forced to run around tracks at speeds of more than 50 kilometres an hour while carrying a jockey on their back. It’s a recipe for disaster.

Many horses are over-medicated to keep them racing when they should be recuperating from injuries, making them vulnerable to breakdown.

What Happens When Horses ‘Retire’?

Even those who survive aren’t guaranteed peace. Regardless of pedigree or past earnings, many horses bred for racing are discarded once they’re no longer useful.

A 2020 investigation by Farm Transparency Project followed the fate of ex-racing Thoroughbred and Standardbred horses to two Sydney knackeries, where hidden cameras captured their slaughter and sale as food for companion animals. Many of the horses seen there were officially listed as “retired” on the Racing Australia website. And in 2019, ABC’s 7.30 programme revealed that around 300 horses used for racing went through a single abattoir in Queensland in just 22 days.

Horses bred by the Australian racing industry are also sometimes sold to the racing industry in South Korea, where they’re slaughtered for meat when they’re no longer considered useful. A PETA exposé of that country’s largest horse abattoir shows castoffs from the racing industry being beaten repeatedly in the face as they’re forced into the abattoir and killed for their flesh.

Not Ours to Use for Entertainment

While media coverage glosses over the bleeding lungs, broken bones, and tragic loss of life, horses on Australian racetracks are subject to severe abuse and often die. How many more deaths will it take before we call time on this disgraceful demonstration of national senselessness?

Please join us in writing to sponsors of the Melbourne Cup to let them know that aligning their brands with this cruel race is simply unacceptable: 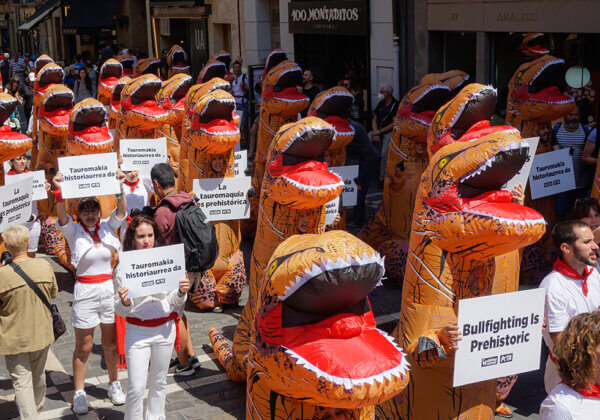 Why PETA Activists Took Gravestones to the Grand Prix