Following years of campaigning by PETA UK, fashion icon and designer Victoria Beckham has pledged to stop using exotic skins in her collections.

Victoria Beckham’s decision to ban exotic skins will spare countless remarkable animals immense suffering, as behind every handbag or pair of shoes made of crocodile, alligator, snake, or ostrichskin is a violent death.

Where Do Exotic Skins Come From?

PETA and our affiliates have released several exposés of the exotic-skins industry.

Alligators are kept in fetid water inside dank, dark sheds before their necks are hacked open and metal rods are shoved into their heads in an attempt to scramble their brains, often while they’re fully conscious.

One-year-old ostriches are transported to abattoirs, where workers turn them upside down in a stunner, slit their throats, and pluck their feathers out.

And snakes are commonly nailed to trees before their bodies are cut open from one end to the other as they’re skinned alive.

In banning exotic skins from all designs, Victoria Beckham joins Vivienne Westwood, Diane von Furstenberg, and Chanel, which have made the same compassionate decision.

These intelligent animals are herded together on barren dirt feedlots and soon will be transported to their deaths.

Please speak out for animals exploited and slaughtered for their skin – ask LVMH, which owns Louis Vuitton, to stop selling items made with exotic skins and fur:

Call on LVMH to Drop Exotic Skins and Fur 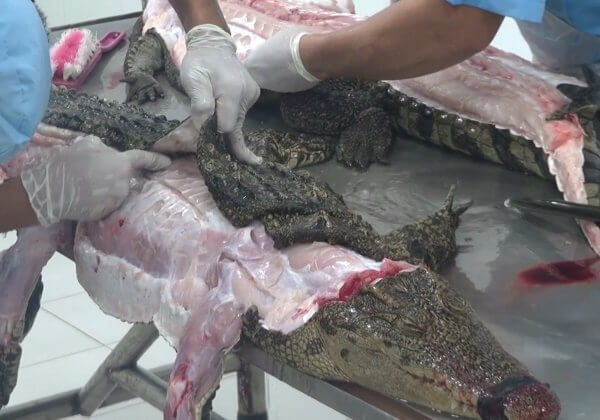