Every year, over 25 million animals in Australia enter saleyards, where they will then be sold at auction to farms or abattoirs.

These facilities often operate on a massive scale, with some saleyards processing tens of thousands of sheep on a busy day.

Saleyards are overwhelming and stressful for the sensitive, intelligent animals who find themselves being auctioned off there as if they were mere products. Sheep, in particular, are prey animals who find noisy, busy environments very frightening.

Saleyard staff use noise and intimidation to scare and herd sheep from one pen to the next. They may rattle noisy hand shakers, prod the sheep with sticks, shout and use dogs to chase the frightened and confused animals.

Sheep can be squashed together into pens so tightly that they may not be able to get up again if they fall, and they can be crushed by those around them.

In this video, which was filmed in February 2016, some sheep have fallen. Their heads are crushed between others’ bodies, or they’re squeezed up against the metal fencing.

The eyewitness investigator reported that the temperature hit 40 degrees that day. Many sheep can be seen panting in the extreme heat and have no access to shade or water.

Injuries are common in saleyards, and animals are often left to suffer without any veterinary attention. It’s not unusual to see broken legs, backs and necks, and sheep sometimes slip on the urine-covered ground. Animals who are not able to get up and move are called “downers” by the industry.

Those animals deemed to have no commercial value will be shot using a captive-bolt gun. Often, this doesn’t kill them immediately, and they may suffer in agony for some time before either their throats are slit or they eventually die on their own.

Australia’s livestock codes of practice are woefully inadequate and allow exemptions from standard animal-abuse legislation. These exemptions mean that animals in saleyards can legally be treated in ways that would warrant cruelty charges if cats or dogs were the victims.

Most sheep in Australia are bred to be used by the wool industry, and much of the wool is sold overseas. Before these sheep ever reach the saleyards, they may have already been subjected to gruesome procedures such as mulesing, in which the flesh around the anus and tail is hacked off without anaesthetics.

Other sheep may be used for meat – around 30 million sheep are slaughtered for their flesh each year in Australia. Approximately 20 million of those killed are lambs.

Bobby Calves: A ‘Waste Product’ of the Dairy Industry

Calves may also find themselves at saleyards – often very soon after birth. After being torn away from their mothers, these frightened babies will be roughly dragged onto and off trucks and into pens to await their fate. Around 700,000 calves are slaughtered in Australia each year – simply because they are male and therefore can’t produce milk.

In recent years, the dairy industry has pushed through new guidelines allowing calves to be starved for up to 30 hours before slaughter – even though the industry’s own research found that this cruelty is harmful to the calves.

Some animals will be taken from the saleyards directly to slaughter. Others will enter the horrific live-export industry and face gruelling journeys overseas on filthy, crowded ships, often to be killed in countries in which animal welfare laws are non-existent.

The remaining animals (usually sheep) will be sold to new farms, where they will continue to be used for their wool – eventually ending up back at the saleyards to be bought and sold all over again.

The best way to ensure that you’re not supporting this cruelty is not to buy wool and not to consume dairy foods or the flesh of sheep and lambs. 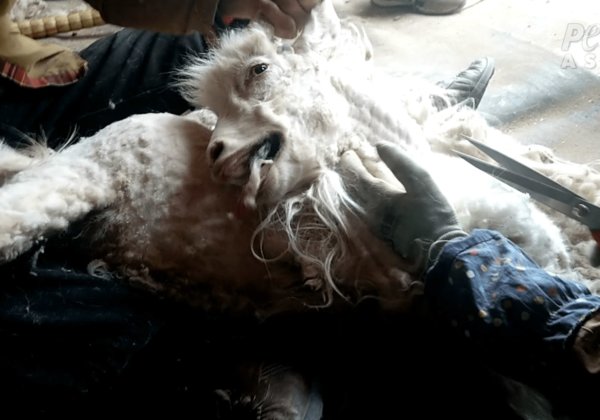