Although wool is often thought of as a natural and sustainable material, this perception isn’t rooted in scientific evidence and data – it’s a false notion perpetuated by the wool industry, which misleadingly greenwashes the industry for profit.

When most people think of wool, they think of fluffy white sheep, rolling green hills, and warm material. In reality, the wool industry is not only cruel but also environmentally destructive.

The Environmental Impact of Wool

The Sustainable Apparel Coalition’s Higg Materials Sustainability Index, which collates industry and impartial data from around the world, finds that the production of sheep’s wool has the greatest climate impact of any material after silk and alpaca wool – even more harmful than cow skin leather, which ranks fourth.

Plenty of other data – which we’ll explore below – also show that wool production is land-inefficient, resulting in habitat destruction, and that this polluting industry is far less “natural” than it first seems.

If scientific evidence doesn’t show that wool is sustainable, why is that such a common misconception? The answer is simple: the wool industry’s marketing department works hard.

The Woolmark Company – the “global authority on merino wool” – exists to promote the material. The company regularly states that “merino wool is grown in the simple mix of sunshine, water, grass and fresh air.” It’s a catchy line that sounds wholesome and environmentally friendly. It’s so catchy that research conducted by Collective Fashion Justice’s CIRCUMFAUNA Initiative and the Center for Biological Diversity found that multiple brands use this exact wording in their own marketing.

This line hides a lot of the realities of wool production. It hides the fact that water is actually polluted by wool production, as the phosphorus in sheep faeces can run into waterways, resulting in eutrophication and sometimes dead zones, where aquatic life can’t survive. It also hides the fact that wool is subjected to an often chemical-heavy process in which lanolin grease is stripped from wool – and that massive amounts of waste from this process are dumped into surrounding waterways.

Meanwhile, brands like Allbirds claim to be reducing the carbon footprint of the shoe industry by producing wool trainers, instead of ones made from synthetics. While synthetics aren’t the solution – as they shed plastic microfibres and are derived from fossil fuels – wool isn’t the answer, either. Did you know that producing a sweater from Australian wool results in 27 times more greenhouse-gas emissions than producing one from cotton? A single kilogram of merino wool – even before it’s processed – can be equal to as much as over 30 kg of carbon-equivalent emissions.

Using similarly suspect claims, Sheep Inc – which PETA and Collective Fashion Justice have reported to authorities for misleading advertising – promises to do “zero harm” to the planet. This claim ignores wool’s impact not only on the climate but also on the land and biodiversity. Sheep’s wool production per bale requires 367 times more land than cotton in Australia. While conventional cotton is far from perfect, organic and rain-fed cotton are far more sustainable all around.

The problem with so many brands’ claims that wool is sustainable is that they rely on the fallacy of nature. This means that these brands try to make us assume – wrongfully – that just because wool seems natural, its production must be good for the planet. In reality, this is not the case.

There are many instances in which “natural” doesn’t mean better or more sustainable. For example, synthetic leather, while not perfect, has a far lower eco-impact than its animal counterpart. Likewise, making cutlery handles and crockery from ceramic china rather than animal tusks and bones is far more sustainable and ethical.

What’s more, producing wool for human use is far from natural. It’s certainly not natural or protective of the Australian environment for millions of sheep to be grazing land which has been cleared of vegetation, leaving native animals – like koalas and many bird species – without habitat and, as a result, endangered.

The processes which wool must go through to be wearable aren’t natural, either. Sheep themselves have been selectively bred and modified for the sake of profit – it is not truly natural for sheep to have so much wool, and their ancestor, the mouflon, had far less, which could be shed in the warmer season.

We must make sure that we don’t buy into the greenwashing of the wool industry and instead look beyond marketing buzzwords to reputable data and scientific evidence.

We also should not be fooled by industry “humane washing”, which claims that using sheep for their wool is ethical and humane. Multiple PETA exposés show firsthand what the wool industry really looks like.

The Future Is Wool-Free

While this is all very grim, have hope! There are so many ethical alternatives to wool – including organic, recycled, and sustainably sourced cotton, hemp, Tencel, and bamboo lyocell – which are better for humans, other animals, and the planet.

Want to take a stand against wool-industry greenwashing? PETA is asking Allbirds to drop wool (and its bogus claims about it) in favour of innovative and truly sustainable plant-based materials. Join in now! 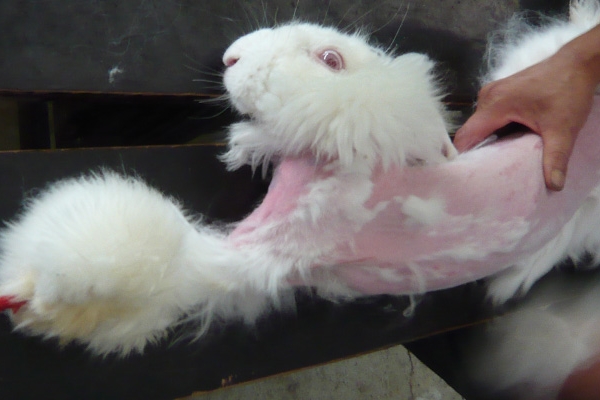 How Rabbits Suffer for Angora